Marianne Moore (1887 – 1972) was an American modernist poet, critic, translator, and editor. She won several awards for her poetry in her lifetime, and her poems are frequently anthologized. 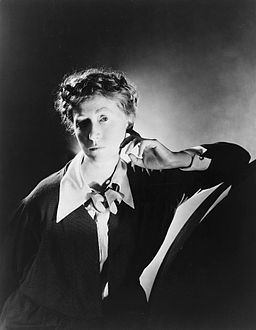 I, too, dislike it: there are things that are important
beyond all this fiddle.
Reading it, however, with a perfect contempt for it,
one discovers that there is in
it after all, a place for the genuine.
Hands that can grasp, eyes
that can dilate, hair that can rise
if it must, these things are important not be-
cause a

high sounding interpretation can be put upon them
but because they are
useful; when they become so derivative as to
become unintelligible, the
same thing may be said for all of us – that we
do not admire what
we cannot understand. The bat,
holding on upside down or in quest of some-
thing to

eat, elephants pushing, a wild horse taking a roll,
a tireless wolf under
a tree, the immovable critic twitching his skin like a
horse that feels a flea, the base-
ball fan, the statistician – case after case
could be cited did
one wish it; nor is it valid
to discriminate against “business documents
and

school-books”; all these phenomena are important.
One must make a distinction
however: when dragged into prominence by half
poets,
the result is not poetry,
nor till the autocrats among us can be
“literalists of
the imagination” – above
insolence and triviality and can present

for inspection, imaginary gardens with real toads
in them, shall we have
it. In the meantime, if you demand on one hand,
in defiance of their opinion –
the raw material of poetry in
all its rawness, and
that which is on the other hand,
genuine, then you are interested in poetry.

Literature is a phase of life: if
one is afraid of it, the situation is irremediable; if
one approaches it familiarly,
what one says of it is worthless. Words are constructive
when they are true; the opaque allusion—the simulated flight

upward—accomplishes nothing. Why cloud the fact
that Shaw is self conscious in the field of sentiment but is otherwise re-
warding? that James is all that has been
said of him but is not profound? It is not Hardy
the distinguished novelist and Hardy the poet, but one man
“interpreting life through the medium of the
emotions.” If he must give an opinion, it is permissible that the
critic should know what he likes. Gordon
Craig with his “this is I” and “this is mine,” with his three
wise men, his “sad French greens” and his Chinese cherries—Gordon Craig, so
inclinational and unashamed—has carried
the precept of being a good critic, to the last extreme. And Burke is a
psychologist—of acute, raccoon-
like curiosity. Summa diligentia;
to the humbug, whose name is so amusing—very young and ve-
ry rushed, Cæsar crossed the Alps on the “top of a
diligence.” We are not daft about the meaning but this familiarity
with wrong meanings puzzles one. Humming-
bug, the candles are not wired for electricity.
Small dog, going over the lawn, nipping the linen and saying
that you have a badger—remember Xenophon;
only the most rudimentary sort of behaviour is necessary
to put us on the scent; a “right good
salvo of barks,” a few “strong wrinkles” puckering the
skin between the ears, are all we ask.

You might also enjoy Marianne Moore’s “Spenser’s Ireland,” especially if you read The Faerie Queene in the British Literature level of Excellence in Literature.