The Wind and the Moon by George MacDonald

There are poems especially suitable for memorization and recitation, and George MacDonald’s “The Wind and the Moon” is an excellent example. The rhythm and cadence of the language is delightful to young readers young and old.

The Wind and the Moon 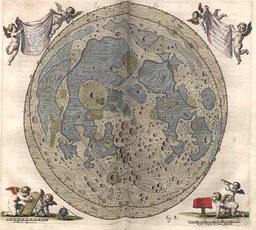 Said the Wind to the Moon, “I will blow you out;
You stare
In the air
Like a ghost in a chair,
Always looking what I am about —
I hate to be watched; I’ll blow you out.”

The Wind blew hard, and out went the Moon.
So, deep
On a heap
Of clouds to sleep,
Down lay the Wind, and slumbered soon,
Muttering low, “I’ve done for that Moon.”

He turned in his bed; she was there again!
On high
In the sky,
With her one ghost eye,
The Moon shone white and alive and plain.
Said the Wind, “I will blow you out again.”

The Wind blew hard, and the Moon grew dim.
“With my sledge,
And my wedge,
I have knocked off her edge!
If only I blow right fierce and grim,
The creature will soon be dimmer than dim.”

He blew and he blew, and she thinned to a thread.
“One puff
More’s enough
To blow her to snuff!
One good puff more where the last was bred,
And glimmer, glimmer, glum will go the thread.”

He blew a great blast, and the thread was gone.
In the air
Nowhere
Was a moonbeam bare;
Far off and harmless the shy stars shone —
Sure and certain the Moon was gone!

The Wind he took to his revels once more;
On down,
In town,
Like a merry—mad clown,
He leaped and halloed with whistle and roar —
“What’s that?” The glimmering thread once more!

He flew in a rage — he danced and blew;
But in vain
Was the pain
Of his bursting brain;
For still the broader the Moon—scrap grew,
The broader he swelled his big cheeks and blew.

Slowly she grew — till she filled the night,
And shone
On her throne
In the sky alone,
A matchless, wonderful silvery light,
Radiant and lovely, the queen of the night.

Said the Wind: “What a marvel of power am I!
With my breath,
Good faith!
I blew her to death —
First blew her away right out of the sky —
Then blew her in; what strength have I!

But the Moon she knew nothing about the affair;
For high
In the sky,
With her one white eye,
Motionless, miles above the air,
She had never heard the great Wind blare.

A reading of “The Wind and the Moon” by Leonard Wilson:

The Map of the Moon depicted at the head of this poem is by Johannes Hevelius from his treatise Selenographia (1647), the first map to include the libration zones.

There is another good reading of this poem, but the video images may frighten a younger reader. If you like, you can watch it with the screen minimized. The Wind and the Moon video (opens in YouTube).