April poems, spring poems — there are so many that it’s not easy to choose just a few to feature here. For now, I’ve chosen to offer just a few; we will add or link to more as they come to mind.

Oh, to be in England
Now that April ‘s there,
And whoever wakes in England
Sees, some morning, unaware,
That the lowest boughs and the brushwood sheaf
Round the elm-tree bole are in tiny leaf,
While the chaffinch sings on the orchard bough
In England—now!
And after April, when May follows,
And the whitethroat builds, and all the swallows!
Hark, where my blossom’d pear-tree in the hedge
Leans to the field and scatters on the clover
Blossoms and dewdrops—at the bent spray’s edge—
That ‘s the wise thrush; he sings each song twice over,
Lest you should think he never could recapture
The first fine careless rapture!
And though the fields look rough with hoary dew,
All will be gay when noontide wakes anew
The buttercups, the little children’s dower
—Far brighter than this gaudy melon-flower!

“When Lilacs in the Dooryard Bloom’d” by Walt Whitman

When lilacs last in the dooryard bloom’d,
And the great star early droop’d in the western sky in the night,
I mourn’d, and yet shall mourn with ever-returning spring.

Ever-returning spring, trinity sure to me you bring,
Lilac blooming perennial and drooping star in the west,
And thought of him I love.

An excerpt from The Wasteland by T. S. Eliot

These evocative lines from T. S. Eliot’s The Wasteland inevitably come to mind when April weather is dismal.

APRIL is the cruellest month, breeding
Lilacs out of the dead land, mixing
Memory and desire, stirring
Dull roots with spring rain.

The Canterbury Tales: An Excerpt from the Prologue 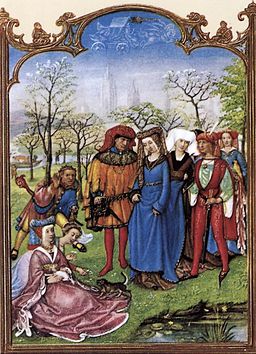 When I think of April poems, one of the first excerpts that comes to mind is the first sentence from the Prologue of Geoffrey Chaucer’s Canterbury Tales, which I’ll provide both in the original and in translation. If you haven’t yet read the Tales, you have a treat in store.

Here bygynneth the Book of the Tales of Caunterbury (Middle English)

Whan that Aprill, with his shoures soote
The droghte of March hath perced to the roote
And bathed every veyne in swich licour,
Of which vertu engendred is the flour;
5 Whan Zephirus eek with his sweete breeth
Inspired hath in every holt and heeth
The tendre croppes, and the yonge sonne
Hath in the Ram his halfe cours yronne,
And smale foweles maken melodye,
10 That slepen al the nyght with open eye-
(So priketh hem Nature in hir corages);
Thanne longen folk to goon on pilgrimages
And palmeres for to seken straunge strondes
To ferne halwes, kowthe in sondry londes;
15 And specially from every shires ende
Of Engelond, to Caunterbury they wende,
The hooly blisful martir for to seke
That hem hath holpen, whan that they were seeke.

As with most epic poetry, the Tales are best heard, rather than just read, especially in the Middle English version. Here is a reading by Diane Jones, followed by a modern translation of this excerpt.

Here begins the Book of the Tales of Canterbury (Modern English)

When April with his showers sweet with fruit
The drought of March has pierced unto the root
And bathed each vein with liquor that has power
To generate therein and sire the flower;
When Zephyr also has, with his sweet breath,
Quickened again, in every holt and heath,
The tender shoots and buds, and the young sun
Into the Ram one half his course has run,
And many little birds make melody
That sleep through all the night with open eye
(So Nature pricks them on to ramp and rage)—
Then do folk long to go on pilgrimage,
And palmers to go seeking out strange strands,
To distant shrines well known in sundry lands.
And specially from every shire’s end
Of England to Canterbury they went,
The holy blessed martyr there to seek
Who helped them when they lay so ill and weak.

From you have I been absent in the spring,
When proud-pied April, dressed in all his trim,
Hath put a spirit of youth in everything,
That heavy Saturn laughed and leaped with him.
Yet nor the lays of birds, nor the sweet smell
Of different flowers in odour and in hue,
Could make me any summer’s story tell,
Or from their proud lap pluck them where they grew:
Nor did I wonder at the lily’s white,
Nor praise the deep vermilion in the rose;
They were but sweet, but figures of delight
Drawn after you, – you pattern of all those.
Yet seem’d it winter still, and, you away,
As with your shadow I with these did play.

Again the woods are odorous, the lark
Lifts on upsoaring wings the heaven gray
That hung above the tree-tops, veiled and dark,
Where branches bare disclosed the empty day.

After long rainy afternoons an hour
Comes with its shafts of golden light and flings
Them at the windows in a radiant shower,
And rain drops beat the panes like timorous wings.

Then all is still. The stones are crooned to sleep
By the soft sound of rain that slowly dies;
And cradled in the branches, hidden deep
In each bright bud, a slumbering silence lies.

Frost’s evocative poem places a contemplation of love, mercy, and duty in a vivid springtime setting.

Finally, a single paragraph from “April Days,” a lengthy essay by Thomas Higginson. It was described as a prose poem by a 19th-century reviewer — I think this excerpt will show you why.

There are no days in the whole round year more delicious than those which often come to us in the latter half of April. On these days one goes forth in the morning, and finds an Italian warmth brooding over all the hills, taking visible shape in a glistening mist of silvered azure, with which mingles the smoke from many bonfires. The sun trembles in his own soft rays, till one understands the old English tradition, that he dances on Easter-Day. Swimming in a sea of glory, the tops of the hills look nearer than their bases, and their glistening watercourses seem close to the eye, as is their liberated murmur to the car. All across this broad intervale the teams are ploughing. The grass in the meadow seems all to have grown green since yesterday. The blackbirds jangle in the oak, the robin is perched upon the elm, the song-sparrow on the hazel, and the bluebird on the apple-tree. There rises a hawk and sails slowly, the stateliest of airy things, a floating dream of long and languid summer-hours. But, as yet, though there is warmth enough for a sense of luxury, there is coolness enough for exertion. No tropics can offer such a burst of joy; indeed, no zone much warmer than our Northern States can offer a genuine spring. There can be none where there [8] is no winter, and the monotone of the seasons is broken only by wearisome rains. Vegetation and birds being distributed over the year, there is no burst of verdure nor of song. But with us, as the buds are swelling, the birds are arriving; they are building their nests almost simultaneously; and in all the Southern year there is no such rapture of beauty and of melody as here marks every morning from the last of April onward.

We welcome suggestions for more classic April poems. Thank you!