The Slavery of Free Verse by G. K. Chesterton 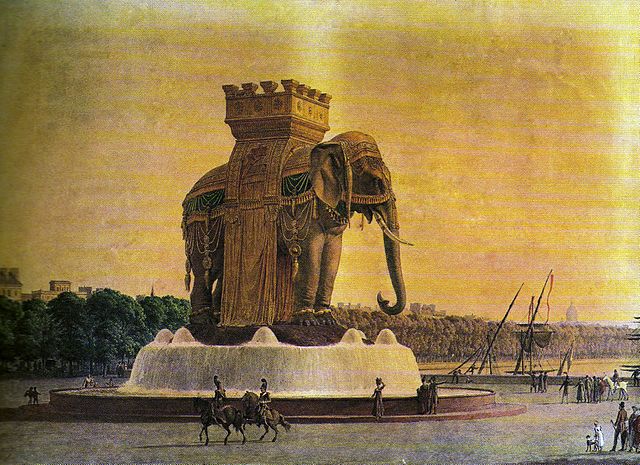 The Slavery of Free Verse

THE truth most needed today is that the end is never the right end. The beginning is the right end at which to begin. The modern man has to read everything backwards ; as when he reads journalism first and history afterwards if at all.

He is like a blind man exploring an elephant, and condemned to begin at the very tip of its tail. But he is still more unlucky; for when he has a first principle, it is generally the very last principle that he ought to have. He starts, as it were, with one infallible dogma about the elephant ; that its tail is its trunk. He works the wrong way round on principle; and tries to fit all the practical facts to his principle.

Because the elephant has no eyes in its tail-end, he calls it a blind elephant; and expatiates on its ignorance, superstition, and need of compulsory education. Because it has no tusks at its tail-end, he says that tusks are a fantastic flourish attributed to a fabulous creature, an ivory chimera that must have come through the ivory gate. Because it does not as a rule pick up things with its tail, he dismisses the magical story that it can pick up things with its trunk.

He probably says it is plainly a piece of anthropomorphism to suppose that an elephant can pack its trunk. The result is that he becomes as pallid and worried as a pessimist; the world to him is not only an elephant, but a white elephant. He does not know what to do with it, and cannot be persuaded of the perfectly simple explanation; which is that he has not made the smallest real attempt to make head or tail of the animal. He will not begin at the right end; because he happens to have come first on the wrong end.

But in nothing do I feel this modern trick, of trusting to a fag-end rather than a first principle, more than in the modern treatment of poetry. With this or that particular metrical form, or unmetrical form, or unmetrical formlessness, I might be content or not, as it achieves some particular effect or not. But the whole general tendency, regarded as an emancipation, seems to me more or less of an enslavement. It seems founded on one subconscious idea; that talk is freer than verse; and that verse, therefore, should claim the freedom of talk. But talk, especially in our time, is not free at all. It is tripped up by trivialities, tamed by conventions, loaded with dead words, thwarted by a thousand meaningless things.

It does not liberate the soul so much, when a man can say, “You always look so nice,” as when he can say, “But your eternal summer shall not fade.” The first is an awkward and constrained sentence ending with the weakest word ever used, or rather misused, by man. The second is like the gesture of a giant or the sweeping flight of an archangel; it has the very rush of liberty.

I do not despise the man who says the first, because he means the second; and what he means is more important than what he says. I have always done my best to emphasize the inner dignity of these daily things, in spite of their dull externals; but I do not think it an improvement that the inner spirit itself should grow more external and more dull. It is thought right to discourage numbers of prosaic people trying to be poetical; but I think it much more of a bore to watch numbers of poetical people trying to be prosaic. In short, it is another case of tail-foremost philosophy; instead of watering the laurel hedge of the cockney villa, we bribe the cockney to brick in the plant of Apollo.

I have always had the fancy that if a man were really free, he would talk in rhythm and even in rhyme. His most hurried post card would be a sonnet; and his most hasty wires like harp-strings. He would breathe a song into the telephone; a song which would be a lyric or an epic, according to the time involved in awaiting the call; or in his inevitable altercation with the telephone girl, the duel would be also a duet.

He would express his preference among the dishes at dinner in short impromptu poems, combining the more mystical gratitude of grace with a certain epigrammatic terseness, more convenient for domestic good feeling. If Mr. Yeats can say, in exquisite verse, the exact number of bean-rows he would like on his plantation, why not the number of beans he would like on his plate? If he can issue a rhymed request to procure the honey-bee, why not pass the honey?

Misunderstandings might arise at first with the richer and more fantastic poets; and Francis Thompson might have asked several times for ” the gold skins of undelirious wine “before anybody understood that he wanted the grapes. Nevertheless, I will maintain that his magnificent phrase would be a far more real expression of God’s most glorious gift of the vine, than if he had simply said in a peremptory manner ” grapes “; especially if the culture of compulsory education had carefully taught him to pronounce it as if it were ” gripes.”

And if a man could ask for a potato in the form of a poem, the poem would not be merely a more romantic but a much more realistic rendering of a potato. For a potato is a poem ; it is even an ascending scale of poems; beginning at the root, in subterranean grotesques in the Gothic manner, with humps like the deformities of a goblin and eyes like a beast of Revelation, and rising up through the green shades of the earth to a crown that has the shape of stars and the hue of Heaven.

But the truth behind all this is that expressed in that very ancient mystical notion, the music of the spheres. It is the idea that, at the back of everything, existence begins with a harmony and not a chaos; and, therefore, when we really spread our wings and find a wider freedom, we find it in something more continuous and recurrent, and not in something more fragmentary and crude. Freedom is fullness, especially fullness of life; and a full vessel is more rounded and complete than an empty one, and not less so.

To vary Browning’s phrase, we find in prose the broken arcs, in poetry the perfect round. Prose is not the freedom of poetry; rather prose in the fragments of poetry. Prose, at least in the prosaic sense, is poetry interrupted, held up and cut off from its course; the chariot of Phoebus stopped by a block in the Strand. But when it begins to move again at all, I think we shall find certain old-fashioned things move with it, such as repetition and even measure, rhythm and even rhyme. We shall discover with horror that the wheels of the chariot go round and round; and even that the horses of the chariot have the usual number of feet.

Anyhow, the right way to encourage the cortège is not to put the cart before the horse. It is not to make poetry more poetical by ignoring what distinguishes it from prose. There may be many new ways of making the chariot move again; but I confess that most of the modern theorists seem to me to be lecturing on a new theory of its mechanics, while it is standing still.

If a wizard before my very eyes works a miracle with a rope, a boy and a mango plant, I am only theoretically interested in the question of a sceptic, who asks why it should not be done with a garden hose, a maiden aunt and a monkey-tree. Why not, indeed, if he can do it? If a saint performs a miracle to-morrow, by turning a stone into a fish, I shall be the less concerned at being asked, in the abstract, why a man should not also turn a camp-stool into a cockatoo; but let him do it, and not merely ex-plain how it can be done.

It is certain that words such as ” birds ” and ” sweet,” which are as plain as ” fish ” or ” stone,” can be combined in such a miracle as ” Bare ruined quires where late the sweet birds sang.” So far as I can follow my own feelings, the metre and fall of the feet, even the rhyme and place in the sonnet, have a great deal to do with producing such an effect. I do not say there is no other way of producing such an effect. I only ask, not without longing, where else in this wide and weary time is it produced? I know I cannot produce it ; and I do not in fact feel it when I hear vers libres. I know not where is that Promethean heat; and, even to express my ignorance, I am glad to find better words than my own.

This essay was originally published in a collection called Fancies vs. Fads, 1923.

Gilbert Keith Chesterton (1874 – 1936), popularly known as G.K. Chesterton, was a prolific British writer, lay theologian, poet, dramatist, journalist, orator, literary and art critic, biographer, and Christian apologist. He is noted for his use of humor and paradox, and was described as “a colossal genius” by his good friend and debate opponent, George Bernard Shaw. C. S. Lewis cited Chesterton’s book, The Everlasting Man, as having had a significant influence on his life and conversion.

Here is a video about G. K. Chesterton, by one of his biographers, Joseph Pearce.

Back to Chesterton resources index